Pollinators
Alfalfa Pollination
Ants, the Unlikely Pollinators
Bees and Vitamins
Bees in the Garden
Beguinners Guide to Pollinators
Blowflies are Pollinators Too
Bumble Bees and Odor Pollution
Bumble Bees and Turtleheads
A Busy Pollinator and a Relaxed One
Buzz Pollination of Fabaceae Flowers
Crab Spiders Hiding in Goldenrod
Don't Underestimate the Native Pollinators
Flower Flies, the Great Impersonators
Flower Longhorn Beetles, the Elegant Crowd
Globetrotting Butterflies
More Globetrotting Butterflies
Globetrotting Skippers
Hairy-legged Fly, a Gardener's Friend
Importance of Native Pollinator
Magnolias and Beetle Pollination
The Mason Wasp and the Caterpillar
Metallic Green Bees
Monarch Butterfly, a Case of Mistaken Identity
Monarchs and their Enemies
The Midge and the Chocolate Lover
My Bees and Climate Change
Native Bees, Honey Bees and Natural Areas
Of Bees and Honey. What is Honey for?
One Bite out of Three
One Bite out of Three and Wildlife
One Bite out of Three Before Columbus
Our Friend the Elephant Mosquito
Partners and Robbers
The Pure Magnificent Green Bee
Pollinator Gardens Do Double Duty
Pollinators in Winter
Pollinators of Official State Flowers
Pollinators of the American Chestnut
Pollinators, the Night Shift
Pollinators of the Pine Barrens, NJ
Roadside Pollinator Gardens and Traffic
Robbers and Thieves
A Sea of Blue Flowers
Sneezeweed or Helenium
Sticky Pollen
Symetry
Syrphus Fly, a Pollinator and Aphid Eater
The "Unbeetle" Beetle
Thrifty flowers
What is the Connection between Honey Bees and Almond Farming?
What is the Connection, II. Corn
You can Help Pollinators in your Own Garden

Bee Houses
Bees in the Garden
Pollinators in Winter

Flowers, their strategies
The Life of a Flower
Bumblebees and Turtleheads
Deceitful Flowers. Lady Slipper
Only Friends Welcome Here
Maple Flowers
Flowers Schedule
Inkberry Pollination
Jack-in-the-pulpit and its Cruel Deception
Nectar: Breakfast of Champions
Nectar: Drink with a Zing?
Where Have all the Spring Beauties Gone?

Biological Interactions
Alien Invasions
The Birds and the Bees. The True Story
Bugs in the Garden. Hornworm: Friend or Foe? Friend and Foe
Food Chain in the Milkweed Patch
Goats put to Service at Pennypack
Goldenrods and their Dependent Fauna
Goldenrods Fabulous Fauna
Goldenrod Galls and their Fauna
Goldenrod Galls, the Long Stemmed Ones
Hidden Life on a Pear Tree
How Much is a Bat Worth?
Introduced Species Develop Unexpected Relationships
Invisible Bird Food in the Foliage
Ladybugs, Praying Mantis and Other So-called Beneficials. Are They?
The Living Constellations Beneath our Feet
Mile-a-minute
Milkweed's Last Hooray
Milkweed's Last Hooray. Part II
Milkweeds, Monarchs and More: The Milkweed Community
The Monarch's Breadbasket
Squirrels, Managers of the Forest
Stinging Nettle. Food for Butterflies and Food for Us
The Hornet's Nest
Turtles, Shorebirds and Us
Viburnum leaf beetle, an introduced pest
When did "Common Milkweed" Become Common?
Wildlife Food and Non-native Plants
The Year the Bears went Hungry

Birds
Caterpillars are for the Birds
Feed the Birds
Invisible Bird Food in the Foliage
“Locavore” Birds. Grow your own Birdseed
A River of Birds

Nature
Funny Larvae
Hidden Life on a Pear Tree
Plastics are not Part of the Web of Life
Pollinators: Too Much Light!
The Sounds of Nature
Utilities Right of Way. Native Plants
Wasps, Motherhood and Ultrasound

Biocontrols
Bugs in the Garden. Hornworm: Friend or Foe? Friend and Foe
Goats Put to Work at Pennypack
How Much is a Bat Worth?
Mile-a-Minute
Ladybugs, Praying Mantis and Other So-called Beneficials. Are They?
Pollinator Gardens Do Double Duty
Syrphus Fly, a Pollinator and Aphid Eater
The Prolific Aphids
The Hornet's Nest

Defenses against enemies
A Butterfly´s flashy colors
Bees and stingers

Imitation is the Best Form of Protection in Some Cases
The Great Impersonators, Flower Flies
The Poop Bug and the Golden Beetle

Little stories
A Night in the Life of a Working Mother
Floral Emissaries
For the Love of Flowers
The Dancing Grasses
Dancing in the Valley of the Lilies
Official State Insects
The Poop Bug and the Golden Beetle
The Year the Bears Went Hungry
Ladybeetles, the Good Ones and the not so Good
Posted by Beatriz Moisset at 2:49 PM 1 comment:

Dancing in the Valley of the Lilies 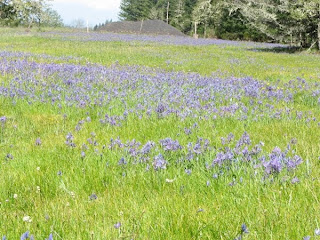 The air was crystal clear in the meadow under the warm May sun, blue sky above and blue camas lilies below. That was the Mountain Dawn Farm Prairie, surrounded by trees and by more blue in the distance, the Cascade Mountains. 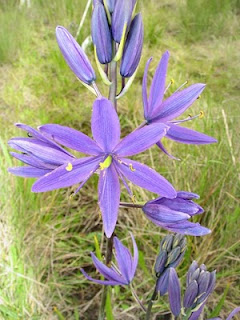 Many flower visitors buzzed along coming and going busily, most of them bees and bumblebees, but there were others; one in particular caught our attention. It had emerged from the ground after long winter sleep, along with numerous brothers and sisters. We called him SBF, a silly name but we all knew what we were talking about. SBF was a handsome dance fly with bright eyes, a hunch on his back, a slender abdomen and a thin, long tongue that had earned him the other name by which it is known, dagger fly. He delved deeply into flowers with his tongue and drank the nectar. He could also use his dagger for other purposes as we'll see later. 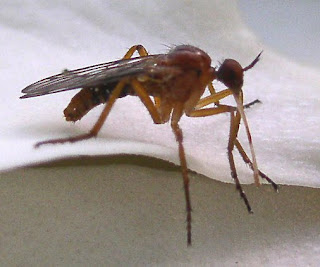 The nectar fueled his flight and he was doing a lot of flying that day. In his short life as an adult he had only one purpose, to find the girl of his dreams, seduce her with a well chosen present and make love to her. If time allowed he would find another girl of his dreams the next day. But for now he was busy searching for a wedding present that could satisfy the most demanding damsel. Midges were perhaps the best choice. He wanted one big enough to be appealing to his intended but not too heavy that he could not carry it for a certain stretch of time. He knew that at some point he would end up carrying both the prey and his beloved, so he had to make a careful choice.
When he saw a suitable one, he quickly pounced on it and stabbed it repeatedly with his dagger to subdue it and also to start preparing the delicious meal that he knew ladies willing to mate would favor. 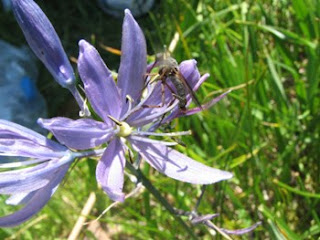 After that he wrapped his gift with silk of his own making. Then he flew through the meadow in search of a meeting place, the equivalent of a singles bar. How do dance flies know where to congregate? I wouldn't know. But he did find a gathering with several suitors holding nuptial presents, just like the one he was carrying. He noticed with satisfaction that his gift compared favorably to most of the others. He joined the group suspended on the air, flying up and down, back and forth, holding his precious cargo on front of him, just as all the other bachelors. If you come into a cloud of them, you would think that they are dancing. That is how they got their name. More and more bachelor flies joined the ranks of dancers, all of them holding a present and all of them quivering with expectations and desire. 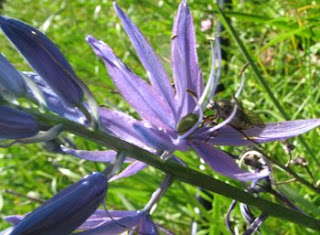 Meanwhile, somewhere in the same meadow a young female had emerged from the ground, the same as her brothers and had started her search. She looked very similar to the boys with one big difference, instead of a slender belly; hers was like an oval, loaded with eggs. Let us call her FBF. For those of you who are wondering about the names, SBF is a nickname, the full name being: Skinny Black Fly, so it is only appropriate that his plumper female relative be called Fat Black Fly. FBF needed protein to nourish the eggs that were her future children but she wasn't about to waste her precious energy on the search for food. She would let her lover take care of that. So she tried to make herself more seductive in order to attract the best suitor, one strong enough to provide a worthy and nutritious gift. Knowing that the males love well endowed ladies she plumped her stomach as much as she could. A little deception doesn't hurt, besides the boys were not beneath adding extra wrapping to their presents making them look bigger than they really were, so they were even. A fat belly in a female is a sign that she has a full load of mature eggs; neither he nor she knows that but they behave as if they knew it.
Off she went searching for the nearest gathering, wondering if she would find her knight in shining armor. Arriving at a meeting place, one handsome fellow caught her eye immediately, it was SBF. The gift that he was holding looked quite satisfactory so she approached him avoiding one or two overly eager fellows with their puny offerings. SBF was overjoyed when he saw her and gave her his package. She took it without ceremony and proceeded to devour the delicacy folding her wings and letting him carry her. For a few seconds the extra weight caught SBF by surprise but he quickly adjusted to it and flew some distance seeking privacy. There was no time to wait. He wanted to make love to her for as long as the meal permitted and so he did. 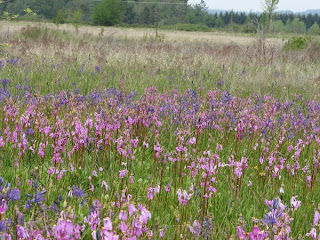 There isn't very much else to tell about this brief romance, other than soon FBF found the right place on the ground. It had some rich decomposing organic matter that would supply nourishment to her future babies and also warmth and shelter through the long months of winter. She laid her eggs there starting the new generation that would repeat the flower visits and the sun dance the next May.

List of articles
Posted by Beatriz Moisset at 12:25 PM No comments: