Squirrels, Managers of the Forest

A squirrel approaches a mushroom growing under a pine tree. It sniffs it and breaks off a piece. It scrambles up the tree carrying its treasure, finds a comfortable branch to sit on and proceeds to eat the snack to the last crumb. Then it wipes its whiskers daintily, shakes its fur and scurries away to go wherever it is that squirrels go when they feel full and contented. 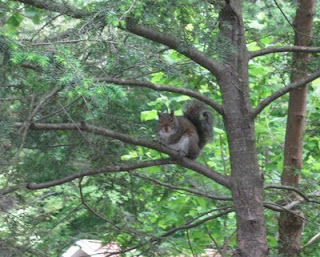 This vignette is more than a trivial episode; it is forest management at its best. It is a fine example of the intricate web of life of the forest. How so?

Let us unravel the links of this chain. The chunk of mushroom that the squirrel just snacked on contains numerous spores which will travel intact through the entire digestive system of the little fellow. The spores will come out at the other end, fall to the ground, some of them will germinate and eventually produce new mushrooms. 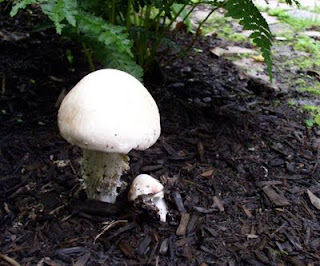 There is a fungus under that very same tree where the squirrel enjoyed its meal. You don’t see it because it is underground. It is made of a myriad thin threads spreading in all directions in the darkness of the moist soil. It intertwines again and again making tangles and becoming one big network. It seeks the rootlets of the tree; when it senses one it approaches it, penetrates it and proceeds to grow inside the rootlet. The tree fights this invasion at first, producing little knobs at the entry point, but it soon surrenders. The fungus hungrily absorbs nutrients from the root. And then a miraculous thing happens: this fungus gives as much as it receives. It is more efficient than the tree at collecting water and salts and it passes some of these much needed commodities to the plant. The fungus becomes an extension of the tree, reaching hidden pockets of soil that rootlets cannot access. Thus it is called a mycorrhiza, which means fungus-root.

Periodically, the mycorrhiza produces “fruits”, although the more appropriate word is “fruiting bodies” since they don’t carry seeds but spores. These fruiting bodies are mushrooms that sprout from the ground almost overnight and almost magically. A mushroom is like an apple and the whole “apple tree” is the fungus buried underground. This is the mushroom that the squirrel ate and whose spores the little animal will spread unwittingly and not very elegantly somewhere else.

So the green foliage above takes the sunshine and turns it into molecules of life, sugars and other nutrients, and sends them down to the roots. There they also nourish the fungus which, in return, supplies the tree with water and minerals taken from the soil. The squirrel, blissfully ignorant of its job as keeper of the forest, scampers away with a belly full of spores that will keep the fungus-tree partnership going for many years to come thus ensuring the survival of its own home, the entire forest.

The Living Constellations Beneath our Feet
List of articles
Posted by Beatriz Moisset at 11:17 AM No comments: