The year the bears went hungry 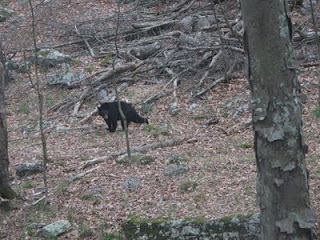 Do you remember the children's book: Blueberries for Sal? Sally, a little girl, went blueberry picking with her mother every year. One day the two humans had a close encounter with a mother bear and her cub who were feeding on berries in the same blueberry hill. Both bears and humans decided to leave each other alone and continued their activities in opposite sides of the same hill. The thrill of this encounter remained firmly embedded in the minds of Sal and her mother.

What the book didn't tell you is that a few years later Sal and her mother went blueberry picking as it was their habit and suffered a big disappointment when they found no blueberries. The plants looked very healthy but almost totally lacking in fruit. So they went to the store where they bought berries for their traditional annual jam.

The mother bear and her new cub went also blueberry picking as they did every year and their disappointment was bigger than that of the humans. To them the juicy fruits were vital and they could not resort to a grocery store. That winter they went to sleep very hungry and it is not known whether they survived that tough season after such deprivation.

What Sal and her mother didn't know and what the bears had no way to know was that there had been a severe infestation of the nearby spruce forest. The caterpillars of a moth had reached enormous numbers and were defoliating the forest. To combat such a pest the foresters had sprayed a powerful insecticide, not realizing the further consequences of this action.

Blueberries need to be pollinated by very diligent bees, not necessarily honey bees, but a wide array of native bees, in particular the so called blueberry bee. Many of these bees nest near the trees that had been sprayed to combat the spruce worm. This brought tragedy to the little bees. They were poisoned just as effectively as the spruce worm and died by the millions. As a consequence nobody pollinated the blueberry flowers and the shrubs produced no fruits.

When blueberry growers in the area realized what had happened, they rose up in arms. They finally succeeded in putting an end to the pesticide use. However, it took several years for the bee populations to recover and as a consequence blueberry bushes, as well as a number of other plants in the area, produced very limited amounts of fruits and seeds. Not only bears suffered the scarcity of berries, but also a number of wild creatures of the forest that also depend on such food, such as birds. It is quite possible that many of them died of hunger.

Let us hope that the health of the forests and surrounding fields was eventually restored, so that Sal, her children and grandchildren can go on enjoying this marvelous web of nature made of blueberries and bees and of birds and bears.

List of articles
Posted by Beatriz Moisset at 5:38 PM No comments: