I worry sometimes when people insist on seeing the merits of some introduced plant and claim that it is good for wildlife. We are all familiar with butterfly bush attracting butterflies and with the berries and rose hips of several alien plants which feed the birds. I have also seen Queen Anne’s lace blossoms covered with flower visitors. Another example is this blog article about English ivy and pollinators: Pollinators aplenty: English Ivy mixed blessings. The author tells us that the English ivy in his property is attracting numerous pollinators at a time when there aren’t any native flowers. He suggests that we “should step back and view non-natives with less disdain until we understand better what roles they now play in their adopted habitats.”

I think that this philosophy shows a lack of understanding of ecosystems and of what is missing in those that have been altered by humans. We tend to think that habitat loss is something far away, clear-cutting in the Amazon, for instance. We seem to forget that the urbanization and suburbanization of the areas where most of us live are representatives of a huge amount of habitat loss.

When pollinators and birds resort to non-native flowers and berries, it is because the habitat has been severely disturbed and the native plants that were supposed to sustain them are lacking. A healthy habitat is an assemblage of co-evolved and synchronized plants and the wildlife that feed on them. The absence of such plants is a very sad indication that the ecosystem has been dramatically disrupted.

Calling non-native plants beneficial to wildlife is ludicrous. They are merely acting as prosthesis. If I had a leg amputated, I too would sing the praises of a high quality prosthesis, no matter how alien to my body it was. But, I would prefer my own, native and co-evolved with my body, original leg.
Let us not be seduced by the fact that some introduced plants are used by wildlife. Normally, the natives do that job a lot better, plus they provide countless other services to the ecosystem. We are barely beginning to understand the very complex interactions between all the members of a living community. It is becoming apparent that most of them are missing when we mix organisms from all sorts of places.

More on the subject: I do not hate invasive species

The viburnum leaf beetle (Pyrrhalta viburni) was introduced accidentally along with non-native ornamental viburnums from Europe and Asia. It took perhaps a hundred years for it to become settled and to start multiplying in noticeable numbers. By then it had found out that native viburnums, such as arrowwood, were good to eat and lacked defenses against them. The consequences were, perhaps, unavoidable; the beetle is spreading across North America ravaging native viburnums.


List of articles
Posted by Beatriz Moisset at 6:49 PM No comments:

Ladybugs, good and not so good


We all love ladybugs. Some children’s books tell charming little stories about them. Even schoolchildren know that ladybugs eat bad insects. Five states, Delaware, Massachusetts, New Hampshire, Ohio and Tennessee, have chosen these handsome little beetles as their official state insects. Most ladybugs or ladybeetles deserve our esteem. They eat countless numbers of insects that damage our plants, so we are grateful. 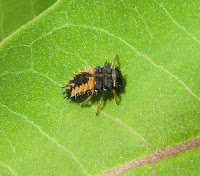 Beetles, just like butterflies, go through a complicated life cycle. When they are growing up they look completely different from the cute little round buttons we are most familiar with. They start as larvae or, if you prefer, as grubs. Ladybug larvae are so ugly that you would want to squash them in disgust if you found them on your plants. Please, don’t! Remember that they clean up your garden from pests. 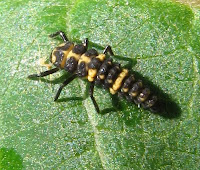 How can I describe them? They look like tiny alligators, longish, usually dark and with six stumpy little legs. They grow bigger and eventually, they curl up, become rounder, go to sleep and emerge from this stage as shiny new ladybugs. Both adults and larvae devour aphids or other little bugs with gusto.

What could be bad about ladybugs, or about some of them? It turns out that not all are worthy of our unconditional applause. Some have been brought to this country or to Europe, with the best of intentions, to fight unwanted pests. While they are quite good at this job, sometimes they wear out their welcome.

The first ladybug introduced in North America was the “vedalia” beetle. It was brought from Australia to combat the cottony cushion scale, a nasty insect that was decimating orange groves in California by sucking the plants vital juices. It was a stunning success; the beetle brought the pest under control to the great relief of citrus growers. This species of ladybeetle specializes on cottony cushion scale, which in turn specializes only on plants of the citrus family. So it never became a problem by not going beyond its boundaries. This is not the case with many other introduced insects.

After such success several other imported ladybugs joined the ranks of pest fighters. The most common and better know is the Asian ladybeetle or multicolored ladybug. It has spread so widely throughout North America that it is the ladybug you are most likely to see nowadays. It is not a picky eater, so its diet includes many kinds of aphids as well as other small soft bodied insects.


And this is part of the problem; it is quite capable of eating other ladybugs or to out-compete them by its proficiency. As a result it may be driving some native ladybugs toward extinction. It also can become a nuisance to us because of its inclination to search for warm, comfortable places to spend the winter.


It often finds shelter in garages, outbuildings or even our homes. Entire hordes of shelter seeking multicolored ladybeetles may invade our residences much to our annoyance. It seems that the crowds keep getting bigger each year.


We still can’t appreciate the impact of this ladybug on some of the native species and on the ecosystems. But it doesn’t sound good. We continue to observe the development of events rather helplessly. In Europe the multicolored Asian ladybug has been declared a pest. It is too late for that here.

List of articles
Posted by Beatriz Moisset at 3:05 PM 2 comments: