The milkweed food chain would be incomplete without predators and parasitoids. Most of them are out of sight in November; but a few are around feeding on whatever is available, mostly aphids.

Two species of ladybugs or lady beetles find abundant food on the dying milkweeds. A shiny adult polished lady beetle (Cycloneda munda) may be getting ready to hibernate. A little farther a pupa of the multicolored Asian lady beetle (Harmonia axyridis) stays still on a leaf. It is rather infrequent to find one so exposed. This one is darker than most pupae of this species, but as its name indicates, color variations abound. In another month it would become an adult, out of its pupa. It would turn out darker than most of its kind.

Another type of aphid eater is present in numbers and feeds on the two species of aphids mentioned in the previous post. The larvae of syrphid flies are blind and worm-like, lacking legs. Despite these disadvantages, they have no trouble finding aphids to feed upon, provided that the mother was careful enough to lay her eggs near a growing and prosperous colony of aphids.

It is impressive to see these maggots thrashing around until they find a plump juicy aphid. They hold it with their strong mouth parts and proceed to suck all the internal fluids until the prey is reduced to a deflated piece of skin. You can see the front end of the larva acting as a pump, expanding and contracting. Oddly, the other aphids in the colony have no fear, no premonition of what is in store for them. I have seen them approaching and then walking all over a syrphid maggot in total indifference.

In a couple of weeks this will be all over. No more active life in the milkweed patch; just a few flying seeds carried by their fluff. The monarchs are long gone. All others remain in the area in hidden places safe from the weather and from the occasional winter predator. They will all return to their usual activities next year, when the milkweeds start sprouting new shoots and providing nourishment to them.

Goats Put to Service at Pennypack 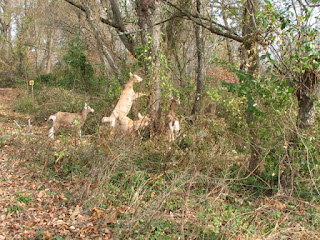 If you go for a walk at Pennypack Ecological Restoration Trust, you may run into some unusual workers recently enlisted to deal with weeds.

My friend and I went there for a walk last Monday and came upon four goats inside an enclosure made of electrified wires. These handsome creatures were merrily munching away brambles, multiflora roses, and oh joy, poison ivy!

Three young men wearing green shirts with the Pennypack logo were putting the final touches on the signs alerting people about the electric wires. We were full of questions for them and were pleased to see them eager to talk.

They told us that restoration programs have started using goats to control invasive vegetation, particularly in the West, and also in Staten Island, New York. Sometimes goats are more effective and more economic than herbicides or weed-whacking. Thus, these fellows convinced the director to start a goat program at Pennypack.

The four goats arrived last Easter and were put to work a month later, after a period of acclimation. Until now they had been doing their weeding job in secluded areas out of sight of visitors. This was their first day in a more visible place by the main trail. It is the visitors' turn to get habituated to the goats and to begin to appreciate their restoration services.

Everyday, these eager workers are brought to a patch in need of clearing and left there until dark. They may have to return to the same spot the next day if they haven't finished the job. After that, they are gradually moved to other patches. The goats spend the night in a roofed shelter safe from coyotes. Did you know that there were coyotes in Pennypack? Now you do.

I returned four days later to inspect the progress. The enclosure had been moved a short distance from that of the first day. The happy animals seemed to never stop chomping away at brambles and vines. At first, it wasn't easy to tell what they had accomplished; but after I found my bearings I could see that, in fact, they had disposed of a significant amount of tangled vegetation. They had also munched on the bark of some tree branches. They are not to blame for being so indiscriminate. It is the human handlers' responsibility to place them only where they can do no harm to valuable native plants.

The plan is to restore the goat-cleared areas by replanting them with native plants. This method beats using herbicides. It also beats using human workers, especially when poison ivy is abundant or when the mats of vegetation are impenetrable. Bear in mind that goats may cause damage to valuable plants if given the opportunity; so precautions are needed.

I will continue checking periodically on these four legged employees of Pennypack.


It is November. We are deep into autumn. Monarch butterflies stopped feeding on milkweeds and are long gone from this area. Milkweeds are wilting, dropping leaves, some covered with sooty mold, and others reduced to dry stems and seed pods. Still they continue to nourish and shelter a number of species that depend on them.

A noctuid moth, the striped garden caterpillar moth (Trichordestra legitima), spends the winter as a pupa. An occasional caterpillar hangs around this late in the season taking advantage of the last scraps of food. Unlike monarchs, it is not choosy. This one happens to be feeding on common milkweed but others find nourishment in an incredible assortment of plants, from asparagus to yarrow or tobacco.

Aphids are busy sucking juices from the few remaining green stems and leaves of milkweeds. Their colonies are usually considerably larger this time of the year. The most frequent species on common milkweed is the oleander aphid (Aphis nerii), a bright yellow-orange one.

Less common is the aphid called only by its scientific name, Myzocallis asclepiadis, about the same size as the oleander aphid, almost translucent, with dark dots and often seen sharing plants with its more colorful relative. Myzocallis asclepiadis specializes on Asclepias, as its name suggests. The oleander aphid has broader tastes, living on other members of the dogbane family (Apocinaceae), as well as occasionally some plants of the potato family. This aphid is not native to this hemisphere, and, curiously, there are no males in the North American populations, so they only reproduce parthenogenetically or by virgin birth.

A colorful beetle, the swamp milkweed leaf beetle (Labidomera clivicollis) is not as selective as its name indicates and also feeds on common milkweed, as this larva was doing. It is unusual to find a larva still feeding in November. There was an adult nearby.

A common denizen of dry and dying milkweeds is the large milkweed bug (Oncopeltus fasciatus). Both adults and juveniles (called nymphs) feed on seeds of this plant as well as leaves. So it is not surprising to see them in large numbers in November.
Soon all these milkweed visitors will be gone, too. The one that will remain will be the longhorned milkweed beetle (Tetraopes tetrophthalmus). Its larvae will remain buried underground feeding on roots and waiting for next spring.

Beginners Guide to Pollinators and Other Flower Visitors