“Locavore” Birds. Grow your own Birdseed 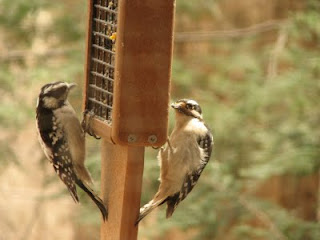 Are we being a bit unrealistic about this business of buying bird seed? I don’t quite understand all this farmland devoted to growing bird seed. I assume that the farmer has to prevent birds from ruining his crop. So, all and all, I don’t think that we are truly helping the birds this way. Instead, we are bringing them to our yard for our own selfish pleasure and depriving them of habitat somewhere else.
If we really wanted to feed birds in our backyards we should grow our own birdseed, rather than buying it from other sources.
I know that bird seed has become a big business in recent years. It was a very good idea at the beginning and feeding the birds continues to be an educational tool that helps people appreciate wildlife. But perhaps it has gone too far. What we really need right now is to start growing plants beneficial to birds in our own backyards: the ultimate in “eating locally”. 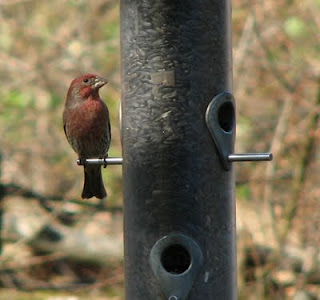 I began to ask myself these questions and soon realized that I am not the first one. I simply googled “grow bird seed” and found out people who grow gardens from bird seed. I also found those who despair because spilled seed keeps growing where it isn’t wanted. They seem to miss the irony on feeding the birds and fighting against growing bird seed. “Buy only shelled seed”, “nuke it in the microwave oven” they say.
Fortunately the ones that choose to grow bird seed have a lot of good advice, from discussing the benefits of growing only native seeds to the money saving aspects of such gardening. I am sure that a little planning would be very helpful. Not all the bird seed that you buy will grow in your area and not all would look pretty in your garden, but there are some that can really enhance the beauty of your garden, plus being beneficial to pollinators as well as birds.

Feed the birds with native plants


List of articles
Posted by Beatriz Moisset at 7:02 PM 3 comments:

A river of birds 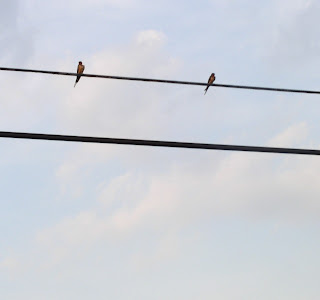 I keep an old National Geographic map posted on my wall. It is a map of the Americas with the flyways of migratory birds, long undulating arrows, some stretching from Canada and Alaska all the way to the southern tip of South America.

I was stunned the first time I saw that map and became instantly a bird watcher. I wanted to know more about this amazing phenomenon. Every autumn, these tiny feathered creatures develop the urge to move south. Some are veterans that have done the journey several times before; others are novices, with no knowledge of where they are going.

They know nothing beyond the nest where they were born just a couple of months before and the piece of land surrounding that nest. Now they are taken by this uncontrollable need to move. Are they following their parents or some ancestral instinct imprinted in their genetic material? In either case, they are inexorably pushed forward grueling hour after grueling hour, day after day. Most fly by night and choose higher altitudes to avoid being cooked alive by the heat of exertion and, perhaps, to escape predators.

So, they fly over meadows and forests, valleys and mountains and, most remarkably, over open ocean. An early Spanish explorer sailing through the Caribbean described a river of birds passing overhead.

Many know that they have arrived when they see the verdant forests of the Amazon and settle there for a few months, until the urge to move again brings them back to northern latitudes. Others keep going, on and on, five thousand miles and more, all the way to the Argentinean Pampas and to Patagonia. Only then they rest.

The roster of these long distance travelers is impressive. Starting with the most famous one, the peregrine falcon, the list goes on to smaller fliers: plovers, sandpipers, gulls, swallows, even a nighthawk and the tiny red eyed vireo. They all leave Canada and the United States in the late summer or fall, cross the equator and reach the Pampas at the start of the southern summer. There, they rest and wait until it is time again to start moving north in their quest to raise a family.

What captured my imagination the first time I saw that National Geographic map was the realization that the same bird I saw here in Pennsylvania in the summer may be arriving a couple of months later at my home town in Cordoba, Argentina. I told my family: If you see a bobolink, a swallow or a sandpiper, say hello to them. They are carrying my greetings from here.


List of articles
Posted by Beatriz Moisset at 5:34 PM No comments:

In praise of bare spots in the garden

Some gardeners consider any exposed earth as a blemish in need of a cure, be it mulching or reseeding the lawn and watering. But in a well balanced ecosystem even bare spots have a place, and a very important one at that.
How so? Because they provide habitat and housing for an array of unappreciated garden helpers. We should know more about them. The list is long, so I will not try to cover them all, just illustrate a few interesting ones. 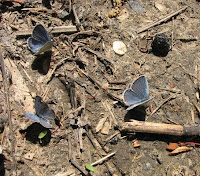 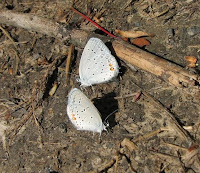 Butterflies. We all love butterflies and associate them with flowers and nectar drinking, but the fact is that after they fill up their tummies with nectar; they still need other nutrients, salts. One way of getting the needed salts is to take them from moist soil. It is not uncommon to see a group of butterflies, either all of the same species or several species amiable mixed together, basking in the sun while sticking their long tongues on the wet soil to extract some minerals or drink some water. Many gardeners attract butterflies by providing flowers for nectaring and plants for feeding their young. It helps to go a step further and provide them with some much needed bare ground. 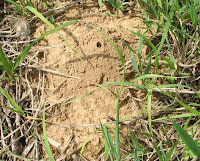 Bees. Bees are the most important pollinators, not just honey bees but the countless species of solitary bees. Most species of bees don’t make hives like honey bees. Instead they lead solitary lives, each one tending her own brood. Some nest in hollow twigs or similar holes, but the great majority nest in tunnels underground. Sometimes they cluster their nests near each other creating veritable towns; other times they take advantage of any small patch of bare soil and build their nests there. In general they prefer sunny and well drained spots.


Solitary wasps. Just like bees there are numerous species of solitary wasps that nest in the ground. Many wasps visit flowers for nectar and perform some pollination. But, perhaps more importantly, they hunt for insects to feed their young. A healthy population of solitary wasps would cut down the need for pesticides significantly. Solitary wasps, as well as solitary bees, are not likely to sting and even if they do so when molested their sting is very mild.

Tiger beetles. Another form of pest control is the very colorful metallic green tiger beetle. Tiger beetles belong to a group called ground beetles for obvious reasons. They spend most of the time on or in the ground. Tiger beetles are ferocious hunters of insects. If you provide them with some bare soil you can count on them for keeping pest populations down.

In summary, bare spots contribute to the balance of the garden ecosystem. They provide food or habitat for a number of garden helpers, namely pollinators and pest controls. When you consider all their benefits you wonder why we are so unwilling to tolerate them. Shouldn’t we look at them as an integral part of the garden? There are some gardeners that intentionally make some sand piles and make sure that no pesticides get to them.

Beginners Guide to Pollinators and Other Flower Visitors


List of articles
Posted by Beatriz Moisset at 5:20 PM 2 comments: