The Poop Bug and the Golden Beetle 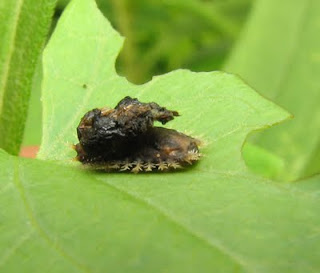 Somewhere out there, there is an ugly little bug with a sweet tooth for sweet potato leaves. It goes about munching leaves day after day and growing very fast. It starts life the size of the period at the end of this sentence or smaller and when it is fully grown it is still no bigger than a shirt button. Moreover if you saw one you would think that you were watching a bit of dark poop on a leaf. You would be very surprised when this black you know what started walking around and, if you watched very closely you would realize that there is something alive underneath.

The bug under that nasty dark pile has a funny looking tail with branches and hooks. It looks like a coat rack and the bug uses it precisely for that purpose. When he keeps growing, his skin becomes too tight for him so he grows a new, thin, elastic skin under it and peels off the old one; the new skin has room for growth because it can stretch before it gets harder and it allows room for growth. Each time that the poop bug sheds its old skin, it hangs it on the coat rack. Then the bug adds its own wastes on top of the wrinkled old skin. To do this it sticks out a long and flexible hose coming out from its back end and skillfully spreads the material on top of the existing messy thing. When it dries up it turns dark and rather disgusting. You can see it doing this in this video.

This ill mannered creature carries the whole thing over its body like an umbrella; that is why you can hardly see the bug. Why would it have such a filthy habit? Didn’t its mother teach it any better? Well, it turns out that it has a very clever reason for doing such a singular thing. The poop bug is a tasty morsel that any passing bird would gobble up with relish. But birds don’t feel tempted by this ugly sight, so they fail to see the snack underneath. That is how the little bug can go on munching away unmolested hiding from its enemies in plain sight.

Sweet potato plants look similar to morning glories with climbing vines, light green leaves and pretty trumpet shaped flowers. They look alike for a good reason; they are related. The poop bug likes morning glories just as well as it likes sweet potatoes; so if there are some morning glories in your neighborhood you may be lucky enough to find a poop bug if you look for them. Look at the leaves and if you see holes here and there you may be on the right track for finding a poop bug. Remember that they are very little, no bigger than a shirt button. Also, it may have already left the plant and moved on somewhere else. However, if you see one it is possible that it will wave its umbrella once or twice if startled, hoping to scare away the observer.

After it has been eating almost non-stop for a couple of weeks it will reach its full size and now it will be ready to turn into its adult shape as a beetle, that looks vaguely like a tiny ladybug. This is not an easy transformation; a lot has to take place to make all the changes, grow legs, antennae, wings. So it needs peace and quiet while doing all this remodeling. It may move to another plant nearby, not necessarily a morning glory, sweet potato or related plant, but something altogether different such as goldenrod. 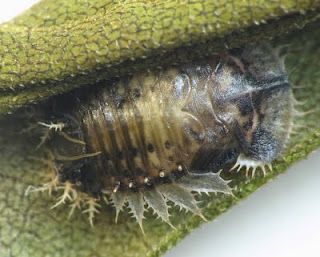 It prefers to anchor itself on the underside of a leaf and once there it sheds its skin one more time and may or may not drop the umbrella along with it. Now it looks like an armored little tank called a pupa. The pupa goes to sleep for just about a week, after which time it wakes up ready to start a new life. During this time not much happens on the outside, but huge changes are taking place inside.

When it is time to come out of this shell the poop grub has one final trick up its sleeve. The front part of the pupal case opens up on two hinges; all what it takes is a little push and the front opens like a double door and the brand new beetle emerges like a car getting out of a garage, a very tight parking space if I may say so. 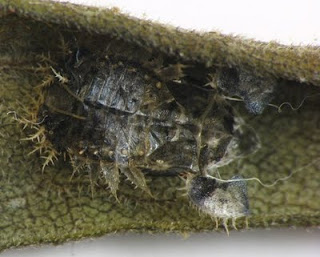 The gorgeous little creature that emerges bears no resemblance to the larva or the pupa. It is like a tiny turtle; its shell is glossy pink with a hint of gold. And then, depending on how the light hits it, it looks gold with a hint of pink; it may remind you of nail polish. It is pale at first, becoming a little richer and darker in a few hours. It usually sports six black dots; its edge is flared and transparent. The freshly emerged new beetle waves two delicate antennae exploring the new world. It may take a while before it tries its new wings and take to the air. Now it can proudly bear the name for which it is best known, the golden tortoise beetle. You can learn more about the golden tortoise beetle in Bugguide. 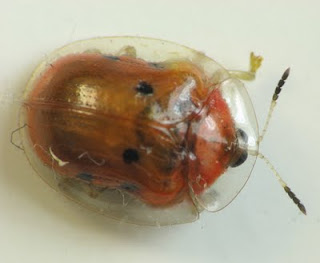 One wonders how this little piece of gold and pink emerged from such ugly, dirty grub. Keep checking those morning glories, you may be rewarded by its sight, just remember, it is no bigger than a tiny gob of pink nail polish.
Posted by Beatriz Moisset at 4:01 PM No comments:

A friend gave me a large hornet's paper nest the other day. She had found it last summer when she got stung while mowing her lawn. The nest was up on a tree, hanging from a high branch. After that she was weary of approaching the general area but did nothing to remove the nest and didn't suffer any further attacks. When Fall came, a strong wind broke the branch and brought down the paper nest already abandoned by its inhabitants.

When she gave me the nest, she asked me a few questions while we both marveled at its craftsmanship. There are several species of wasps referred to as hornets. They build paper nests up on trees using chewed pieces of vegetable material that hardens and becomes the consistency of paper.

This is what Bugguide has to say about the life cycle of this particular kind of hornets: "A fertilized queen overwinters and starts a paper enclosed nest in the Spring. As the colony grows, multiple tiers are added, consisting of hexagonal cells. Males appear in the Fall." The Texas Agricultural Extension adds this information. And you can find a few more facts in the Fairfax County Public Schools website.

Hornet's stings can be very painful and they are more likely to attack when you happen to be close to their nests; that is where the expressions "mad as a hornet" and "hornet's nest" come from. Also, they can make nuisances of themselves, especially in the fall when they boldly approach any food available at picnics. Most people don't want to know anything beyond that; hornets are to be feared and avoided. An exterminator is the first thing that they think of when finding a nest in their properties.

But, there is another side to the story, worth examining. Hornets are omnivorous eaters whose diet seems to know no limits, but it can be grouped in two types: food for the adults, mostly sugary materials to fuel their flight, and food for the growing babies, rich in proteins needed for building new tissues. They obtain the sweet materials from a variety of sources, from flower nectar to spilled soda on a picnic table; but mostly from the first. Thus, in their frequent visits to flowers they carry pollen from flower to flower and accomplish pollination. Although not as efficient as bees they deserve recognition for their job as pollinators. When it comes to feeding their babies, their diet is just as varied as the sugary one, ranging from living insects to cooked meat; from flies to bacon and hard boiled eggs. But, ordinarily, the main source of the baby food is insects that they catch in large numbers. They pounce on their prey, chew on it turning it into a pulp and feed this mush to the growing larvae in the colony.

I would like to think that they specialize on harmful insects and leave beneficial ones alone; but, of course, this isn't true. They are equal opportunity predators and quickly attack anything available from honey bees to flies or caterpillars; as well as taking advantage of any dead meat available, be it a dead mouse or table scraps. However it seems that the bulk of their prey is made of all sorts of flies, house flies, blow flies, robber flies, flower flies, and everything in between. Many years ago a researcher counted 227 flies caught in an hour by a relatively small colony of about 60 wasps.

Caterpillars also figure prominently in their diet; once again they attack a wide range of species from butterflies to moths. Tent caterpillars are among the undesirable pests that they prey on; they may also feed their babies on Luna moths or painted ladies.

They have other connections with the rest of the living world. Some birds, such as the red eyed vireo use paper fragments from abandoned wasps nests to insulate and decorate their nests. Finally, hornets themselves are part of the food chain, providing nutrition to a number of other creatures, birds such as fly catchers, toads, bats, raccoons, etc. They are part of the web of life, linked to the plants they pollinate, the prey species they control and the species that they nourish.

My friend was wise in letting the wasp nest follow its natural course, rather than calling an exterminator. The busy hornets took care of countless insects all through the summer.