Turtles, Shorebirds, and Us 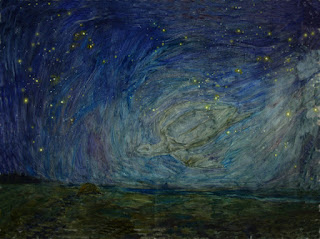 The sun rises above a Florida beach. Dark creatures the size of sand dollars scurry across the sand toward the water: baby turtles, born in the last few hours and rushing toward the safety of the ocean. Many others have taken this road from nest to water line through the night. Darkness provided relative protection from hungry predators. These latecomers face a danger that grows by the minute.

Hundreds of shorebirds have taken notice of the bounty and even invited others with joyous screams. They skillfully dive, beaks and claws at the ready, picking up one delicious morsel after another. Many of the newborns fall prey to the hungry mob, but others pass through the gauntlet and reach the safety of the waves.

You tell me that you worry about the turtles and fear for the survival of the species after reading that populations have been declining steadily. So you chase the birds away.

I tell you that the turtles have been laying eggs on these shores for eons. Birds have been helping themselves to the feast for just as long. They have not driven the turtles to extinction, and they are not likely to do so. They have succeeded in molding the turtle's physiology and behavior, though. That is why most baby turtles emerge at night; that is why they make a dash toward the water; that is why they are shaped the way they are. If raccoons were more abundant than birds, turtles would respond to the nocturnal predation and eventually most of them would emerge during the day rather than at night.

Nature tends to keep things in balance. In its cruel arithmetic, most babies are not supposed to live. To maintain the turtle populations, all it takes is two hatchlings reaching adulthood and reproducing for each egg-laying female. And each female lays hundreds of eggs not once but many times in the course of her lifetime, most of them doomed to die without reproducing. 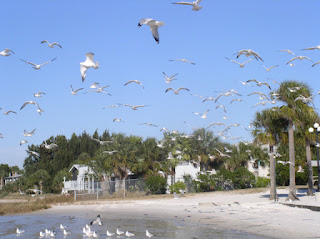 No, I say, the most serious threat to sea turtles doesn't come from predators. It comes from us, humans. Pollution, electric lights, heavy beach traffic, both by foot and by vehicles, pets on the loose, fishing nets, human-caused climate change . . . all these things combined put turtles and many other creatures at risk of becoming extinct.

I love the spunky baby turtle and its determination to survive. I also love the graceful seabird that preys on the innocent little turtle. I love all creatures and enjoy their beauty. But I love the web of life even more. Its exquisite quality is hidden from ordinary sight. Understanding it takes observation and careful thought. The marvelous intricacy of the web of life connects all creatures and makes possible their existence. So, you and I would do better to ignore the predatory birds. Instead, let us work together in preventing or mitigating the ecological damage that all of us continue to inflict on the planet. 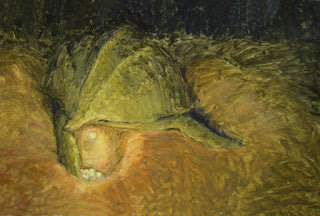