Somebody I know lamented that the pretty ailanthus webworm moth (Atteva aurea), despite being native, got the name of the tree of heaven (Ailanthus altissima), a Chinese tree that, after being introduced as an ornamental, has become dreadfully invasive. The explanation of this state of affairs makes perfect sense.

The ailanthus webworm moth's original geographic range extended from Central America to southern Florida where its larvae used to feed on several trees, related to the tree of heaven. Probably it was known only by Lepidopterists, those who study moths and butterflies, and not by the general public. When the tree of heaven was introduced as an ornamental, the moth took a liking to it and found it quite digestible. Now it was free to move to other places, following this new host plant. With time it became far more abundant and widespread than originally.

Nowadays it is found throughout eastern and central United States and Canada, wherever the tree of heaven is grown. In fact, it cannot be regarded as a native species in such areas, but an introduced one. Political boundaries are irrelevant. What matters is the ecological distribution.

Even more complex is the story of theColorado potato beetle (Leptinotarsa decemlineata) which is neither from Colorado, nor a potato beetle. Originally this beetle lived on Mexico and southern United States and fed on local plants related to the potato. 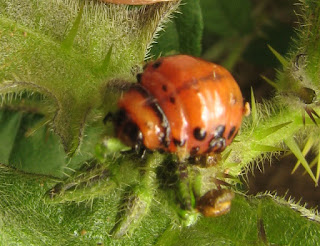 The adult beetle is roundish with ten stripes along its body. This is what decemlineata refers to. The larva is also almost round, orange with black spots. The larvae feed on buffalo bur, so called because its fruits are burs that cling to the fur of animals. The plant uses this means of transportation to spread to other places. It turns out that the beetle larvae can catch a free ride and also expand its territory by this means. Buffalo bur is related to potatoes. They are both members of the same genus, Solanum.

The potato beetle started getting longer rides when cattle drives became common. This is how it eventually arrived in Colorado and Nebraska. Buffalo bur and a few other members of the Solanum genus were present there, so the beetle found enough food to make a living. And then, one day, oh joy! Potato agriculture started in the United States. Potatoes turned out to be a great food for these beetles, and they were available in abundance. What a bonanza!

This is how a beetle that had been hardly noticed until then became the exasperation of potato growers and this is how it earned its common name. It never had one before. Nowadays it has spread to most of North America and, not content with that, it has managed to go to other continents wherever potatoes are grown.


"The presence of aurea in the eastern United States and Canada and its association with Ailanthus altissima (Mill.) (Simaroubaceae) is an interesting subject to be investigated. This plant is an ornamental introduced from Asia and now considered one of the most serious weeds in the United States. It was first planted near the University of Pennsylvania, Philadelphia, in 1784 (W. Thomas, pers. comm.) and from there it spread over the entire country. Once it reached southern Texas, where presumably aurea was already present, the moth started to move north. By 1856 it had reached Georgia, as indicated by the material described by Fitch (1856: 486). Riley (1869: 151) found it common in Missouri, feeding on ailanthus. These records indicate that this showy and common moth was absent in the region before the introduction of ailanthus, and the approximately 70-year gap between the introduction of the host, to the first record of the moth by Fitch, is the time it took the plant to move south and the moth to move north."

List of articles
Beginners Guide to Pollinators and Other Flower Visitors